So if I haven’t mentioned…my backyard is a forest.  Seriously…it’s a forest. 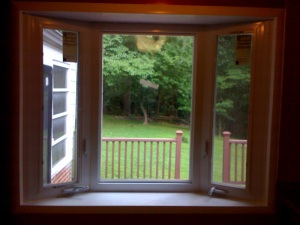 this is before we moved in…

Anyway — this is something very new and very fun for me.  A few days from a month of being a Maryland resident and I still am totally enamoured by the squirrels, chipmunks, deer, hedgehogs and such.  Just the other day on the drive home, from I can’t remember where we were at, there were three deer crossing the street.  CROSSING THE STREET.  The traffic was stopped for said deer crossing the street.  Totally surreal.  But I enjoyed the crap out of it.
Back to Bambi Reality TV.
So every evening I get the wonderful pleasure of watching Bambi and a few of his friends graze on the grass and what have you in our backyard.  Every so often they come up right close to the mudroom – I will be standing roughly 5 feet from them.  It’s totally awesome, and I love it.  This afternoon was a totally different scene…no bambi in sight.
Instead, there was a chipmunk (which might be my favorite – they are so small and cute and FAST!) and about 5 birds, and 7 squirrels all scouring the yard.  I watched as this tiny chipmunk bounced and zipped around the yard digging into the grass that was taller than he was.  Then he really dove into the grass, and had I not been staring at him for the last five minutes I would have lost him, and came back up with a small, white, round…thing.  After about two minutes of sniffing, nibbling and picking at the Chipmunk put this grapesize thing in his mouth and began running around the yard like nuts before finally disappearing under the house.
It was freshly cut this morning/afternoon so I think that is why there was such a buzz.
This scene is SO drastically different from my view(s) anywhere I lived in California.  Last night I was unable to sleep and listened to (the boyfriend sawing some serious logs) the crickets and all the wildlife that lives in my backyard.  My only being here two years is somewhat sad for me.  I’m trying to not get too attached because it is only temporary.  Two years will pass in a heartbeat…our first two years were a blur.  why wouldn’t our next two?